More than three-quarters of older Irish people believe they should be able to spend their own money in their own lifetime – while 69% favour ‘giving while living’ when it comes to providing an inheritance to their loved ones.

These are two of the key findings of new Behaviour and Attitudes research commissioned by Spry Finance1– the sole provider of lifetime loans in the Irish market – which surveyed attitudes towards inheritance in people aged over 60 in Ireland. Ireland has the fastest ageing population in Europe, with 769,000 people aged over-65, an increase of 35% in the last 10 years. As people live longer, their priorities and expectations are changing. It seems that others’ expectations of them, particularly the expectation of an inheritance, are going to have to change as well.

Asked to agree or disagree with a selection of statements regarding their attitudes to inheritance:

However, this doesn’t mean that they’re forgetting about family or friends – they’d just prefer to be generous before they die:

Susie Markey, Head of Compliance for Spry Finance, believes that older people don’t feel old and are realising that there’s a greater life in later life, just there for the taking. As Ireland’s population is getting steadily older, so too is the average age of coming into an inheritance so it’s not surprising that attitudes towards inheritance may be changing.

“Clearly, there’s a sizeable group of older people who are asking why they shouldn’t be able to spend their own money in their own lifetime – it’s theirs, after all – and there’s a smaller group thinking that everyone should be responsible for themselves.” Ms Markey said.

“Our research indicates that, while many over-60s want to spend their own money,  a large portion seem to want to spend it on others. We asked the group how they would spend money raised via a lifetime loan –  not surprisingly, respondents provided more than one answer, with 45% setting up a ‘rainy day fund’, 43% considering the holiday of a lifetime, 34% opting for home improvements, and 28% saying they would use their funds specifically to help a family member to buy a home.”

Other notable findings uncovered by the research include: 50% of those responding to the survey said their children had a ‘right to inherit’ the family home, while 47% thought it was important to leave as much inheritance as possible (as opposed to the 25% who thought their children didn’t need one). Of the entire group, 52% were willing to make some level of compromise to their living own standards to improve the amount of inheritance they leave behind – while 48% were not.

Ms Markey added: “It is important that lenders listen to their customers to fully understand their changing financial needs and objectives. Older people don’t feel old, yet they are generally under-served by traditional lenders. This means that they may find it difficult to access the credit they need to do the things that they want to do in later life.

“Ultimately, it is up to each individual to decide what is best for them in relation to leaving an inheritance for their loved ones, and this decision should be respected. For those wishing to spend – or gift – their own money during their own lifetime, the Spry Finance Lifetime Loan offers customers real choice on how to release and use the value that they have built up in their homes, and empowers people who are living longer, to live better. ” 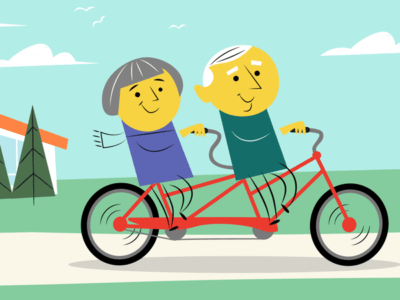 Living with a Loan »